EDUCATION IS AN INALIENABLE RIGHT

A Personalized Learning Resource For All Ages

Able2learn offers evidence based school curriculum, ABA materials, data sheets, social stories, health and puberty, step by step recipes, toileting, bullying and mental health, instructional videos empowering learners to study at their own pace in and outside the classroom. We help acquire skills necessary for skill mastery to help learners establish strong foundations for independence, success at the workplace and school.

Who Do We Serve?

Nina and her son Rohan have researched and created over 1100 evidence based  lesson plans, approximately 40,000 pages, 100 videos for students with disabilities and have over 25,000 professionals as customers using our lessons around the world. Public School Teachers, followed by therapists are the largest users of our world class research-based materials. Parents and Others are the next big users. The other category includes professionals in the industry such as Psychologists, Doctors, Speech Therapists and Occupational Therapists who have multiple students. Private Centres show almost 5 percent usage. Furthermore, this suggests we have a larger outreach that indicated as a single download is used for multiple different students over many years. As such, our estimated global reach is over half a million students, thereby showing how Able2learn is the world's largest free education platform for students with disabilities – forever impactful and changing the lives of students.

Since 2016, we have led strong in our mission to reinvent learning for special needs individuals across the globe with over 70,000 orders and over 30,000 loyal customers. One order can include multiple product downloads. The overall conversion rate for year ending 2021 was 17.82% up from 11.23% 2019. Currently, as thousands are scouring the web for resources for special needs students during the COVID crisis, Able2learn continues to stand out as a leader in accessible education. For instance, in 2021 we had record number of visits at approximately 193,000 people and over 30,000 orders.  Subsequently, beyond raw numbers, Able2learn’s impact is truly significant in this niche market since our annual worldwide outreach is over a half a million students as teachers, private centers, psychologists, speech therapists, ABA therapists and district school heads have multiple students and schools. The universal need of this curriculum is further evident through the programs' use in countries in which special needs children experience cultural barriers and in countries where English is not the primary speaking language. Able2learn therefore continues to be a leader in autism and other special needs education since it accessibly provides the necessary educational resources to the average individual who may have otherwise been unable to afford astronomical therapy and costs that comes with special needs individuals.

Able2learn Curriculum is NOT about the Cure but The Potential

At a young age, Rohan already saw the disparities of education between himself and Niam. He was distraught upon discovering that while he had limitless access to educational resources, there were very few for the 140 million+ people who have autism. He was further disheartened when he realized that amongst the available resources, they were often cost-prohibitive for most families. It was this realization that spurred Rohan to create change for autism education. He began learning ABA at just 6 years old in order to help teach Niam new materials. Eventually, this desire manifested into co-founding Able2learn when he was just in Grade 7.

Today, much of Able2learn’s success is owed to Rohan’s efforts. He has made major contributions to Able2learn from concept formation, to creating and producing visual recipes, puberty curriculum, social stores, math, reading and the 111 Page Social Studies Earth Day Curriculum.  His Niam Jain Art Cookbook of 50 Recipes as been downloaded by professionals and parents all over the world. Rohan has tested out materials, researched programs through academic journals, photographed recipes, edited, and even been a hand model. Rohan helps manage staff and is an integral part of the production process especially offering his expertise in video and website development. Rohan writes all his curriculum and is presently working on a new component of the site to be launched soon. Recently, Rohan has been writing health and puberty curriculum for TASC Scotland’s work with NHS.

Aside from his work on Able2learn and being a 3rd year Philosophy major, Rohan is very active in giving back towards the community.  Rohan is dedicated to helping those that are marginalized. He volunteers his time at Old Age Homes, Food Bank and Children's Aid.  Rohan is a staunch environmentalist. He is currently working on banning plastics in Canada having personally given his draft legislation to the Prime Minister of Canada Justin Trudeau. 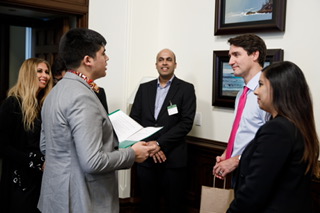 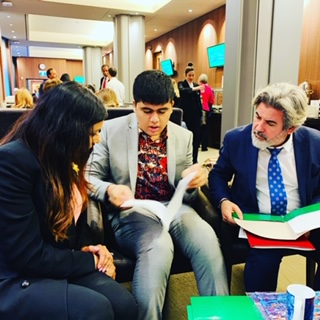 When Nina was awarded the Queen’s Diamond Jubliee Award for her project “Re-Invent Learning” Nina commented, ”Able2learn Inc. is not just another blog, but is a social educational platform where parents and professionals can come together in one big community and help each other” Able2learn Inc. continues to make leaps and bounds every year. For more from Nina, read her blog posts, and follow Able2learn Inc. on various social media platforms including facebook, Instagram, Twitter, Pinterest and Youtube. 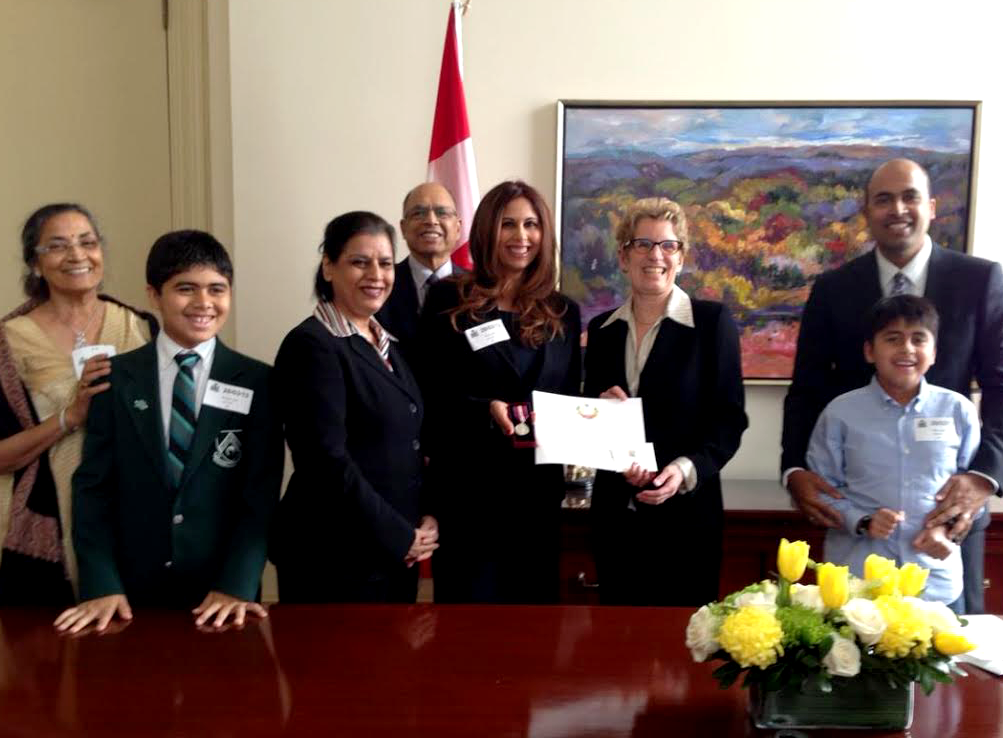 Nina and Able2learn Inc. Was Mentioned In The House Of Commons for World Autism Day April 2, 2017.

2. Masters of Science ( Economics) - The London School of Economics and Political Science

3. Recipient of The Queens Diamond Jubliee Award for Able2learn Inc.

The Inspiration Behind Able2learn - Niam Jain

Eleven years ago, Niam Jain was diagnosed with Autism. I travelled a long and emotional journey where I witnessed and experienced many hardships with availability, equality and access to education for Niam. As many other families, I struggled to find resources, and often made curriculum at home. As Niam was growing up, I recognized the need for a free educational platform and functional skills curriculum that looked at teaching language and literacy, independent daily living skills and a functional curriculum that looked at teaching language and literacy, with the ultimate goal of independence and the skills required to be integrated in society and work. As I created curriculum for my own son, I shared it on the website for others to use, and to my surprise it is accessed by professionals all around the world. My son Rohan Jain founded the company with me. Even as a little boy, he would write curriculum including puberty, environmental curriculum , step by step recipes and was responsible for the development and execution of the website. Rohan and I have worked hard  to create an online library of educational materials to help this marginalized community.

My own son, and Rohan's brother,  is an example of the possibilities with adapted curriculum. He has managed to carve out a niche for himself as an Emerging Canadian Artist winning awards and having sold out shows in galleries. He is independent in daily living skills , functional skills and enjoys learning. Niam has been featured on Global News, CBC National, Samsung Canada and many more,  for his achievements in abstract painting. Aside from painting, Niam is a typical 17 year old teenager. He's an avid video game player, loves to cook – his favourite dishes are cheese pizza, cookies and french fries, he has won in disability sport tournaments, and has achieved art credits for Grade 9-12. Niam is progressing every day and, we are proud of his achievements whether small or big. You can go to www.niamjain.com to see his awe-dropping paintings. Niam is selling his paintings not just in Canada but in the United States as well.  Niam is an example of what access to education can do in bringing a person to employment with supports. Niam's paintings are selling to collectors all over the world. Dive into Niam's World.

He has supported me endlessly,  been patient, and generously contributed to this campaign. Able2learn would not be here today if it was not for him. A big round of applause for Ravi. 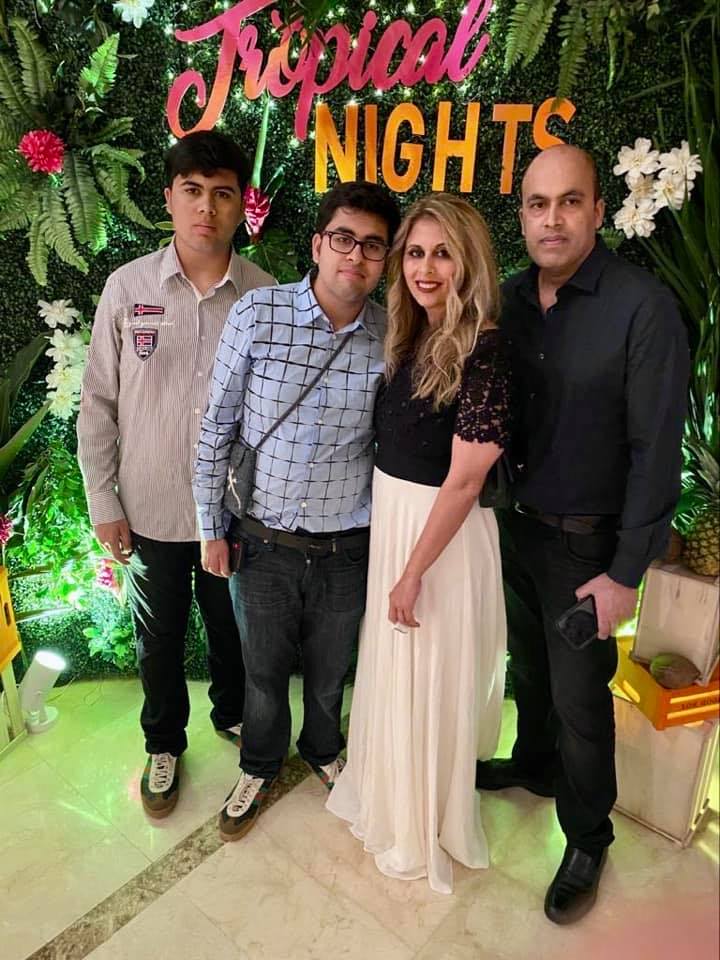 With love from our family to yours,